Where did it begin? 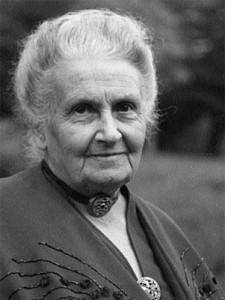 The very first Montessori school, opened by Dr Maria Montessori herself, was in San Lorenzo, Italy in 1907. Dr. Maria Montessori (1870 – 1952) was Italy’s first woman medical doctor and using her scientific and medical background, she began observing children in the children’s houses of Rome. It was as a result of these observations that she began to understand how children learn. She developed unique materials, emphasised the importance of a child sized, child centered environment, and was one of the first persons to revolutionise educational thought by stressing respect for the child. She also advocated the freedom of expression, self-education, and training through use of movement and senses. Currently there are thousands of Montessori schools across the globe, with over 600 in South Africa alone.

How is a Montessori preschool different from other preschools?

In most preschools the children are taught educational concepts in a group by a teacher. In a Montessori preschool the children learn concepts spontaneously when they work independently with the many materials in the environment. Children and adults alike also show deep respect towards each other. Learners are not viewed as empty vessels to be filled with knowledge but as lovers of intellectual work, spontaneously chosen as the child works from his own free choice. No two learners develop at the same pace or have identical interests, which is why learners in a Montessori environment are able to select work that engages them and also repeat more challenging work as often as they would like to.

Is Montessori a franchise?

No. The Montessori Method was developed by Dr Maria Montessori, after whom the Method is named. The Method entails so much more than just beautiful child sized environments incorporating all the scientifically designed materials, it is a philosophy. Any school can name themselves a Montessori school, as there is no trademark on the name nor specific legal requirements that they have to meet. The South African Montessori Association (SAMA) is in the process of releasing a document regarding ‘Best Practices’ which the public can refer to when selecting a Montessori school for their child’s education. This way you can be assured you are dealing with an authentic Montessori school.

What is in a Montessori classroom?

The Montessori classroom is a child-sized world. Whatever is in the world outside can be incorporated meaningfully in the Montessori classroom. To a child, the world is unmanageable – it is too big, too complex, and too confusing. By careful selection of materials by the teacher, an environment is set up that allows the child a place to explore life on a level that he/she can understand. The materials or exercises are designed to stimulate independent exploration. This prepared environment entices the child to proceed at his/her own pace from simple activities to more complex ones. Through this process, the child’s natural curiosity is satisfied and he/she begins to experience the joy of discovering the world about him/her.

What is the role of the Montessori teacher?

The Montessori teacher is called a Directress because she facilitates the classroom activity. She carefully plans the environment in the interests of the children and she helps the children progress from one activity to the next. She is trained to deal with each child individually, allowing the child to choose from many activities with his/her range of ability. She stands back while a child is working and allows the child the satisfaction of discovery.

How do children interact in the environment?

This environment is the child’s community. They move freely within it, selecting work that captures their interest, rather than participating in all-day lessons and projects selected by the teachers. In a very real sense, the children are responsible for the care of their own child-sized environment. They take pride in replacing work once they are finished,, caring for plants and pets, cleaning up spills and helping others clean up spills, pouring and filling.

As the children develop their sense of pride in their work, a feeling of confidence, well being and joy begins to manifest itself in the child. A “new child” is born. A classroom of Montessori children is a joy to watch. There seems to be a spirit of respect, love and cooperation among the children that is not found too often.

With all the freedom, isn’t there confusion?

The concept of freedom in the classroom is a freedom within limits. A child is allowed to work freely so long as he/she does not disturb others. Actually, the child who is allowed the freedom to follow his/her interests is generally happy and busy with the work. Freedom needs to be allowed for learning to be achieved.

Will my child be able to adjust to a mainstream school after Montessori?

Montessori children, by age six, have spent three or four years in a school where they were treated with honesty and respect. While there were clear expectations and ground rules, within that framework their opinions and questions were taken quite seriously. Unfortunately, there are still some teachers and schools where children who ask questions are seen as challenging authority. You can imagine an independent Montessori child asking his new teacher, “But why do I have to ask each time I need to use the bathroom?” or “Why do I have to stop my work right now?” We also have to remember that children are different. One child may be very sensitive or have somewhat special needs that might not be met well in a teacher-centred mainstream classroom. Other children can go anywhere. In general, there is nothing inherent in Montessori that causes children to have a hard time if they are transferred to mainstream schools. Some will be bored. Others may not understand why everyone in the class has to do the same thing at the same time. But most figure the new setting out fairly quickly, make new friends, and succeed within the definition of success understood in their new schools.

What is the best age to start a child?

Maria Montessori outlined various periods of “sensitivity”. During these periods, a child is more capable of and interested in learning specific concepts. At age 2 ½ – 3 ½ a special sense of order, concentration, coordination, and independence begin to emerge. This time is ideal to begin a child’s training in Montessori as he/she is at the perfect period to build a strong foundation for future learning. The preschool Montessori program (curriculum and environment) is designed to accommodate the social, emotional, physical, and intellectual needs of children ages 3 months to 6 years.

Is Montessori opposed to fantasy and creativity?

You will not normally find play kitchens, dress-up corners and dolls in a Montessori class for children under age six, because children are using real tools and doing real things, instead of pretending. However, fantasy and creativity are important aspects of a Montessori child’s experience. Montessori classrooms incorporate art, music, dance, and creative drama throughout the curriculum. Imagination plays a central role as children explore how the natural world works, visualize other cultures and ancient civilizations, and search for creative solutions to real life problems.